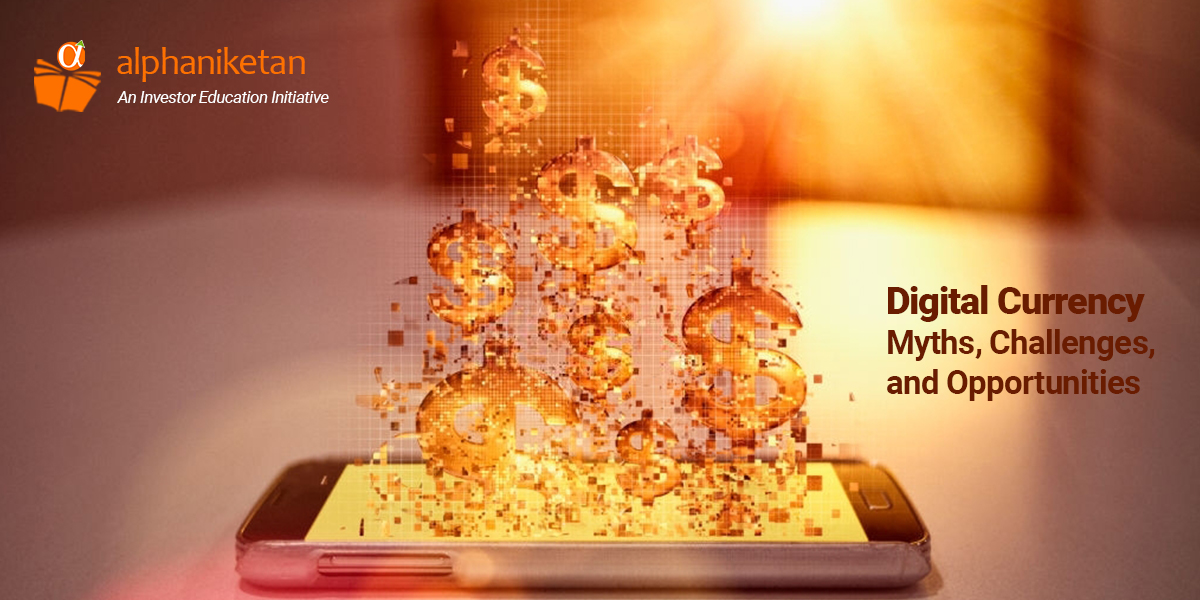 The digital currency (more popularly known as “Crypto-Currency”) push appears to be the next big thing as the world transacts more online. While online payments and payment applications are just about transferring money in bank accounts, digital currencies are far more sophisticated products.

There are many myths around digital currency – especially Bitcoin—since it has attracted a lot of investors’ interest over more than a decade. Some continue to believe it to be a grand Ponzi scheme or speculators’ heaven. However, going by the World Bank report, published way back in 2014, there is enough ground to accept the viewpoint that perhaps Bitcoin is not a Ponzi scheme but in fact an emerging legitimate transaction system! Also, just because the underlying price of a digital currency such as Bitcoin has skyrocketed in recent times, it cannot be termed as a ‘hollow speculative item’. The ease of transacting in Bitcoin is where its real value lies. Bitcoins are also termed as means to funding illegal activities or promote money laundering, given the anonymous nature of transactions carried out with little oversight by regulatory bodies. However, there isn’t enough evidence to support this claim.

Despite these facts, Bitcoins or other private or state-backed digital currency pose a few challenges which users or investors need to understand. Lagging or behind the curve legislation is a serious challenge most users face. There aren’t enough laws and judicial processes in place to protect the interests of the users, especially if a dispute were to arise. Even the jurisdiction involving a disputed crypto transaction could be called into question. Most lawmakers globally are yet to accept the existence of digital currencies and carve out a viable legal ecosystem for them. Digital currencies also face challenges in terms of the absence of interoperability. While the payment apps have decisively moved to interoperability, the digital currencies are nowhere around it. This puts a lot of restrictions on the use them. The acceptance of digital currencies is very low when it comes to day-to-day transactions, even in the developed economies. The lack of clarity on the regulation of digital currency is a serious impediment to the wider acceptance and usability of digital currency. This challenge needs serious commitment and efforts from all stakeholders.

Despite the myths and challenges, there are many opportunities digital currencies offer. In addition to the cost advantage of dealing in digital currencies for both users and issuers, digital currencies empower users/holders with transparency as they can be tracked. The citizens of a country can figure out if the money collected by the exchequer is being used for intended purposes. Also, in the same way, governments will come to know about the flow of money in the economy with the help of its robust tax information network.

Private digital currencies are also seen as a store of value as there is a finite supply of them. The new age crypto currency prices primarily move based on incremental demand and supply. Unlike fiat currencies, holders of crypto currencies do not have to worry about an overnight devaluation or inflation eating away into the value of underlying currency. This is precisely why we have seen Bitcoin prices moving up with every additional dose of fiat currency to revive economies all over the world. Digital currencies, thus, can make a transition to the new world post-Covid-19 smoother. However, despite all the exuberance around crypto currencies at the moment, investors should refrain from indulging in over speculation in them and avoid going overboard just because a particular digital currency is moving up rapidly. As such Crypto currency has finally reached a stage where the savviest investors are allocating a decent part of their overall net worth to this emerging asset class. Finally, clarity on the legal and regulation fronts will further help in developing the digital currency market and give it the required depth that is required of any liquid asset class.

One year of Pandemic and the Stock Market