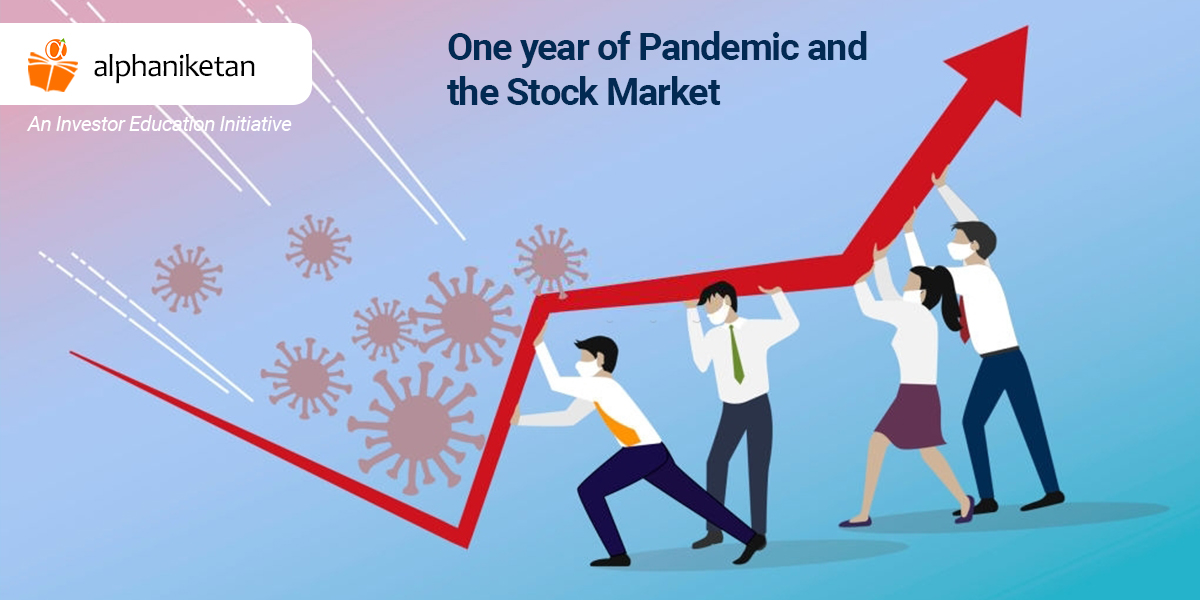 Around January 2020, the Indian stock market which had been scaling lifetime highs in the run-up to the Union Budget started to sense something ominous. Across the world, countries started to get early jitters of an unknown virus beginning to strike mankind with the grim prospect of an outbreak of a lethal pandemic. On 6th March, global selling intensified as fear of the unknown engulfed investors, with Nifty recording the single biggest one-day fall of over 850 points. On 10th March about 50 Covid cases were reported in the Country and by the time people started gearing up for Janata Curfew on March 22nd, the number rose to 360.  Panic was widespread and all-pervasive, sending shock waves across global markets and throwing them in a downward spiral as another Black Swan event started unraveling at breakneck speed threatening lives and livelihoods.

India announced its first total lockdown on March 24th, 2020 which coincided with the stock market finally hitting the bottom at 7511 from its peak of 12400 in January, a vicious and jaw-dropping fall of 40 pc in a short span of 45 days. In the month that followed the number of active cases touched 31787 and deaths reported stood at a staggering 1000 and by mid-May India overtook China with 85,940 cases. The pandemic by then was in full bloom and had unleashed its first wave with a ferocity that cascaded into an unprecedented and mammoth existential crisis for people, economies, and businesses.

Against this backdrop of gloom and doom, the silver lining was the spectacular and sustained recovery in the stock market. In a near replay of the post-GFC recovery measures, Governments and their Central Banks across the world reacted with amazing alacrity and speed to unleash massive stimulus, keep the markets abundantly liquid, and interest rates low to help nations and humankind gradually recover and battle the ongoing crisis.  Markets being forward-looking started to price in the economic setbacks and stock markets started to bounce back with a vengeance never seen before.

The situation for India changed much quicker than expected. With 75 days of lockdown, the country started unlocking by June 8th with 2,50,000 cases and 7,200 deaths. As the nation was unlocked with restrictions being lifted in a phased manner, economic activities caught up and market sentiment changed to another extreme.

By this time, globally there was growing hope around the possible introduction of COVID -19 vaccines, with Pharma majors accelerating their trials and roll-out plans. With late-stage vaccines under development by Moderna, Pfizer BioNTech, Johnson & Johnson, and AstraZeneca Oxford there was a huge surge in optimism all around.  Phase I and II clinical trials were kick-started by Bharat Biotech for India’s homegrown vaccine.

A combination of factors – announcement of stimulus, unlocking of the economy, good corporate earnings, buoyancy in automobile sales, an uptick in the commodity cycle, and launch of Covid-19 Vaccines led to a sustainable up move in stock markets, across the world. In India, the Nifty 50 index shot up to 15,431 on February 16th, 2021, from the low of 7,511 recorded on March 24, 2020– a gain of 105%. Over the same period, the Nifty Midcap 150, and the Nifty Small cap 250 gained 108% and 127%, respectively.

In February, the Government announced a bold and reformist Budget demonstrating its commitment to driving a demand-led economic recovery through unprecedented expansionary fiscal policy. This led to a strong resurgence of market sentiment. Around the same time, in India, the Serum Institute of India obtained emergency use authorization for AstraZeneca’s Covishield vaccine which was in Phase III trial.  By February, Bharat Biotech got the nod to roll out Covaxin which by then had reached Phase III trial stage. With the restoration of near normalcy in economic activities and the launch of vaccines, the recovery in the stock market was broad-based and the indices continued to scale newer highs.

All this while, the fear of the second wave in India was omnipresent, as many European countries were already going through their second and third waves. The virus had been mutating and the strains had been found in different parts of the world, each of them being somewhat different than the other. Alas, around March 9th, there was another unforeseen spike in infections in India. Over the next 30 days, the total number of people infected stood at 13.2 million with recovered cases at 12 million and active cases at 1.2 million. The second wave has affected select states within India and in many places, restrictions have been imposed to break the chain and support the over-stretched medical infrastructure. The government has been pacing up the vaccination drive with total doses administered touching 100 million to date. A combination of rapid testing, ramping up of vaccinations, imposing moderate restrictions that do not impact businesses, and awareness building of safety protocols would ensure that this second wave does not have the debilitating ramifications of the first.

The market, as they say, has a mind of its own. It probably has also built an immunity for this virus as it refuses to get cowered by the impact of the second wave. In the meanwhile, the human race has slowly but surely adjusted to the new normal. Digitization has become permanent, businesses have technology-led anti-fragile models in place with banking, investments, discretionary & non-discretionary shopping, entertainment, education and even socializing going online. The pandemic has changed the world and humans forever…

This article is authored by Arindam Ghosh, Founder & CEO at Alphaniti

Arindam has been involved in key leadership positions across the financial services industry in India and Asia Pacific region across Asset Management, Wealth Management and Fintech.

How to ladder up when the markets are falling?

Economic consequences of the war

Quantitative easing as an antidote to Black Swan events