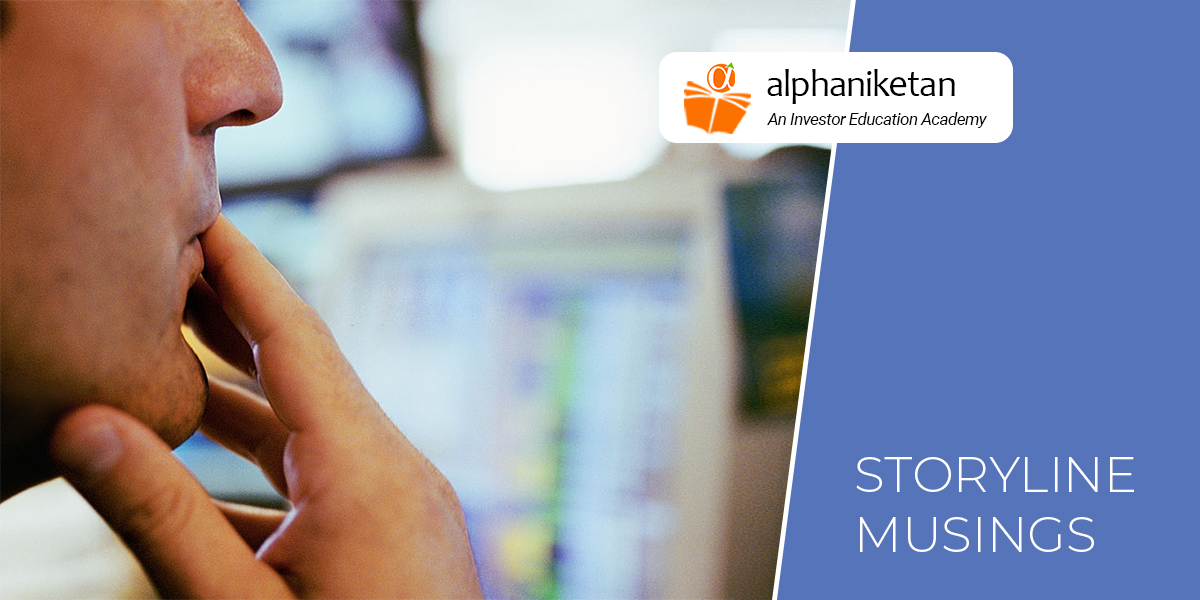 All of us love a good story, especially the ones with well-characterized heroes who overpower treacherous villains that finally leaves us with a good taste in the mouth. This simple story has been retold millions of times whether in prose, poetry, drama, or on celluloid and as a society, we have never got bored of this, as long as there is a new and interesting twist to the tale. The well-articulated spoken word has always commanded attention right through our history, from the time when that was the only mode of communication between Homo sapiens and through which mode, much of history came to be kept alive.

The appeal of skillful storytelling is not limited to literature, the arts and movies. The investing world also relies heavily on artful storytelling, frequently with a sprinkling of exaggeration. Let us recall the prophecies made by some “market experts” in March last year when the Covid pandemic was spreading like wildfire without a vaccine or cure in sight. One such “expert” had then forecast that equities will collapse like nine pins and several large companies will cease to exist – in fact, he had specifically mentioned the name of Tata Motors. This is the typical exaggerated narrative that finds favour with naïve investors at times of crisis. The “expert” indeed appeared to be a clairvoyant at that time and his version of how events would play out was a popular subject for discussion in WhatsApp University.

As events panned out, markets did not collapse like nine pins and all the large companies still continue to be in business, including Tata Motors but the “market expert” continues to confidently rattle off his new prophecies ad nauseam. In the history of Nifty, the worst fall has been around 60% from the then top, at the time of the great financial crisis in 2008-09. The other two big meltdowns have been at the turn of the millennium at 53% and six years earlier to this at 45%. Compared to this, the meltdown in March 2020 was limited to 40% after which the market started rebounding even before the first vaccine was available and as the number of Covid affected continued to rise. There was, of course, fear in the air and large swathes of the population and several of the smaller business establishments were in distress. Most of the larger companies however managed to survive and some of them indeed even grew by successfully coping with the myriad adversities, as they usually do. The “market expert’s” story did not play out and those who got out of equities on his prognosis were left poorer.

In fact, most stories gain traction because they are well crafted and narrated rather than being based on verifiable facts or are well-researched, logical and credible inferences. As J. K. Galbraith, the well-known economist and diplomat once famously said “Faced with the choice between changing one’s mind and proving that there is no need to do so, almost everyone gets busy with the proof.” We tend to hear and look out for stories that confirm our views and beliefs to the exclusion of facts and opinions that point towards a different direction. We would all have come across stories of companies that have been newly discovered by smart analysts that are near-monopolies and are likely to generate growing annuities almost forever. The analysts, therefore, project these growing earnings to near- eternity and come out with price targets that are near-obnoxious.

The fact is that not even one of the thirty components of the Dow Jones index in 1928 finds a place in the current index, all of them becoming either insolvent or insignificant or being taken over. They all looked like having a growing and near-eternal annuities at the time they entered the Dow Jones 30 Index. Similarly nearer home, with just about a third of the history of Dow Jones, 80% of the original Sensex companies have not survived in the current Sensex and even the ones that have survived have fundamentally transformed themselves by entering new lines of business through acquisition or otherwise and shedding some of the original business lines. Several other companies have entered the Sensex in between and have become irrelevant in less than a decade. Forecasting such changes are beyond any analyst’s capabilities and hence any financial model that projects cash flows beyond the next three or four years represents just a leap of faith and little else, despite a powerful narrative to support the model.

Stories keep getting floated about the imminent demise of value investing, the new CEO with the Midas touch, the acquisition that can dramatically change the fortunes of the failing company, the wonder drug that is about to be launched, the imminent mega-collapse of the market and the most famous of them all – “This time it is different”. If the experience of a century of equity investing is anything to go by, the tendency for asset prices to mean-revert generally works and perennially waiting for the big crash may set the investor back by decades. Dramatic changes in people’s habits rarely occur all of a sudden and therefore it is not imprudent to assume that in a post-Covid India, people will still fly on business and for pleasure, stay in hotels, go to the malls, see movies in theatres, eat out and commute to work.

It is not anyone’s case that all these stories end up being wrong resulting in investors losing money. Even the stories that do play out well can turn out to be bad investments because of the timelines involved. As the saying goes, a wise investor is just a couple of steps ahead of the crowd but the fool is several steps ahead. We have all heard the dismal predictions about hyperinflation, collapsing bond prices, a plunging US$, Gold became the only store of value, etc. These may eventually become true possibly, but within one’s lifetime, there is not much scope to earn a decent return on investment if one strongly holds on to such views. The “fear trade” is an all-time favorite with some strategists who carefully caveat their prophecies with a long enough time horizon so that they cannot be questioned during their working lives. Markets are supposed to discount the future but events that could possibly happen in the distant future would take time to show up in current prices and there could be a lot of returns we could end up giving up on the way.

Making shocking prophecies and building a believable narrative around them is truly an art form. Many among equity analysts, economists, statisticians, politicians, and journalists have mastered this art form. This is the way they keep readers/investors glued to their seats like in the case of those disaster movies where the extra-terrestrials, the animal kingdom, birds, robots, etc. take over the world. These make gripping cinema or fiction, but little else. If truth be told, everyone is wrong on almost a regular basis. We need to make course corrections on the way before it is
too late. As they say, it is fine to be wrong but distressing to stay wrong for long. We should be ever watchful to not let the narrative triumph over data. It is therefore intriguing to hear the frequent refrain of Central Bankers about their future course of action being “data-driven”. The simple question that comes to mind is: “Pray, what else have you been basing your decisions on?” As they say, it is much better to be approximately right than precisely wrong. It is time we subject all our decisions to the “smell” test and not allow the power of the narrative and emotionally satisfying tales to get the better of our innate intelligence and the ability to analyze facts.

This article is authored by U R Bhat, Director & CIO, at Alphaniti. Views expressed are personal.

What does the recent broad-market rally in markets tell us?