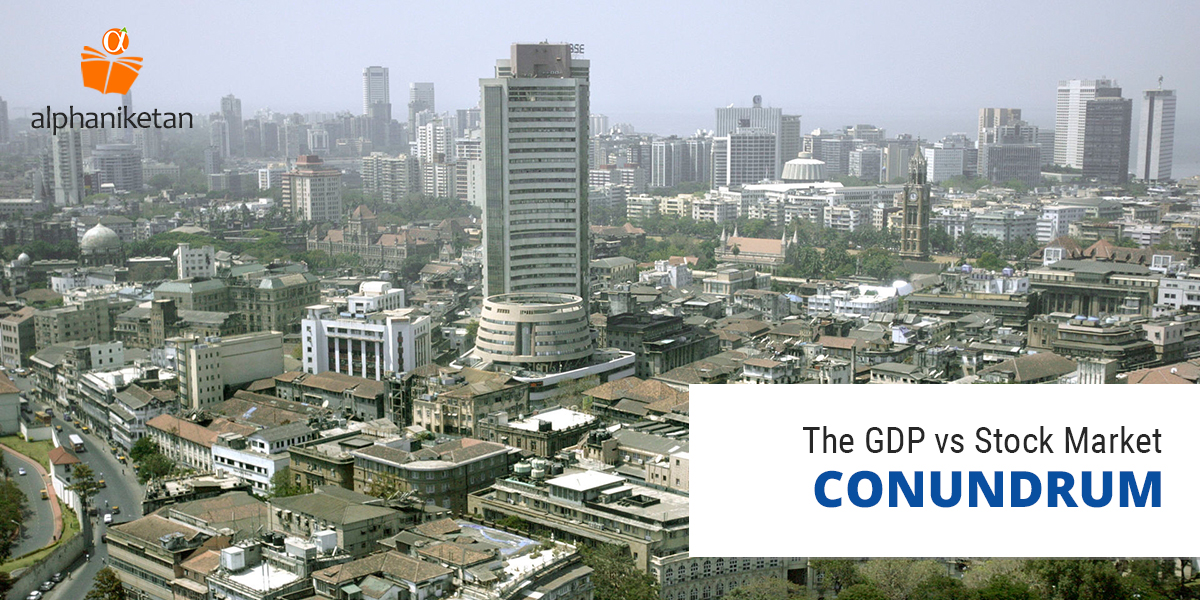 The recent GDP growth number at (-) 24% for the period April to June 2020 has kindled a debate on the apparently complete disconnect between the broad economy and equity market performance during the period.

Well-meaning critics of the stock market have been articulating the utter failure of the equity market to reflect the economic reality of the havoc caused by the raging pandemic in terms of closed factories and commercial establishments, as also the acute health emergency and job losses. Critics argue that of late, the stock market has been functioning in a world of its own, devoid of any apparent concern for the human suffering that is widespread. The stock market no longer functions as a barometer of the health and robustness of the economy but only serves the well-to-do investors to get richer, they argue. This runs counter to the received wisdom that it is the robust economic growth over the last quarter century that has given a fillip to Indian equities with the Nifty delivering a compounded annual return of some 12.5% p.a. including dividends. While these arguments appear to be well founded, it is worth examining why such a dichotomy has come to exist over the last few months.

Services, manufacturing and agriculture represent around 55, 30 and 15% respectively in India’s Gross Domestic Product of around Rs.200 lakh crores.

What is noteworthy is that despite contributing just about 15% to India’s GDP, almost 45% of India’s population is engaged in agriculture and allied activities which means that this activity is much less productive in economic terms compared to services and manufacturing. Of the nearly 6 crore business establishments in India, less than 1% employ more than 20 people each. Again, out of the nearly 2.5 lakh factories in India, less than 5% employ more than 500 persons and less than 10% have an output in excess of Rs.100 crores. These small scale industries are however very important contributors to the economy, accounting for nearly half the exports of the country, around 40% of the manufacturing GDP and the bulk of employment in the industrial sector.

The companies listed in the stock exchanges represent the organised segment of the economy with their sales amounting to less than half of the country’s GDP. Ever since the opening up of the Indian economy in the early nineties there has been a gradual shift of productive economic activity to the organised sector from the informal sector aided by the rising aspirations of the masses and relentless migration from rural areas to urban centres. The formalisation of the economy has been given a massive push by the demonetisation of high value currency notes in 2016. Generally speaking, the larger companies are seen to be more resilient and better equipped to handle sudden changes like the lockdown after the Covid-19 pandemic hit India in March 2020. Quite a few among them, especially in the services sector, have been able to quickly adapt to the “work from home” mode and continue their operations at almost near-normal levels. Among the others, though most have their offices in urban centres, their factories are typically in the interiors where the impact of Covid-19 and lockdown has been less severe compared to the urban centres. This is in marked contrast to the informal sector including small businesses, artisans, unskilled workers, roadside vendors, transport operators etc. where the impact has been rather severe. The varied impact of the lockdown between the organised and informal sectors is one of the main reasons for the apparent disconnect between the performance of the equities market and the marked slowdown in the economy in general.

The equity market values companies based on an estimate of the free cash flows generated by these companies over their lifetime.

While the free cash flow generated during the current year is an important starting point for the valuation, the bulk of the value of a stock comes from the present value of the estimated future free cash flows. As long as the long-term competitive advantage of a company is not compromised by the sudden lockdown and the ability to generate growing free cash flows over the medium to long term remains largely in place, a single year’s earnings shock is unlikely to affect the value of the company dramatically. This is what is likely at play in the stock market at the current juncture. This hypothesis of course assumes that the economy will spring back to normalcy in less than a year from now and it will be business as usual thereafter with probably the less agile companies shedding market share in favour of the more efficient and resilient ones. In terms of price performance, one can see the distinction the market is making between companies and sectors that are likely to recover fast, like those in the telecom, IT, pharmaceuticals, speciality chemicals, consumer goods and automobile sectors vis-à-vis the others which are unlikely to spring back very soon like those in commercial real estate, airlines, malls, hospitality, offline entertainment, Banks and NBFC sectors. However, the path to recovery of the informal economy does not appear to be smooth, at least in the short term. Quite a few of the smaller businesses are unable to cope with the lockdown and may have to permanently shut shop. In many cases, the job losses would end up being nearly permanent and these workers would need to re-skill themselves to find alternative employment. This is what is getting reflected in the recent GDP growth numbers.

Almost all countries in the world are meeting the challenges of economic slowdown and job losses by pumping in liquidity in the form of cheap money into the money markets. The US Federal Reserve has almost doubled the size of its balance sheet in its effort to moderate the economic consequences of the Covid-19 pandemic and to varying degrees, almost all Central Banks have been following suit. Abundant liquidity has moderated interest rates worldwide and with near-zero interest rates in the developed economies, capital finds its way into markets that have the potential to offer higher returns. The foreign investors who exited Indian equities in droves in March 2020 immediately after the lockdown are now back in good numbers and have reinvested most of the money that was taken out. This has significantly contributed to stock market performance after the March rout.

The stock market is a leading indicator of economic performance and the base case now appears to be one of a sharp recovery in the economy over the next couple of quarters. However, one should not dismiss the possibility of a potential change in the base case assumption on the back of new data points and this can change the market sentiment quite fast. In any case, the Indian economy will eventually return to the path of robust growth and the tenuous long term relationship between market performance and economic growth as evidenced over the last quarter of a century and more will eventually play out. For that to happen, the Government and the Reserve Bank of India have to find innovative ways to address the pain in the informal economy and resurrect the country from the doom and gloom that voodoo economists specialise in prophesying.

Written by Mr. UR Bhat, Director at Alphaniti

UR Bhat is one of India’s highly acclaimed investment managers having managed foreign institutional investments in the Indian market. In his previous roles, he has been the CIO at Jardine Fleming (JPMorgan) and ran Dalton Capital’s India investment advisory arm. He has done his M.Sc. from Indian Institute of Technology, Kanpur, and is a Fellow of the Chartered Institute of Bankers, London

Making sense of the India opportunity

Sparkle your portfolios with “Diwali Picks”