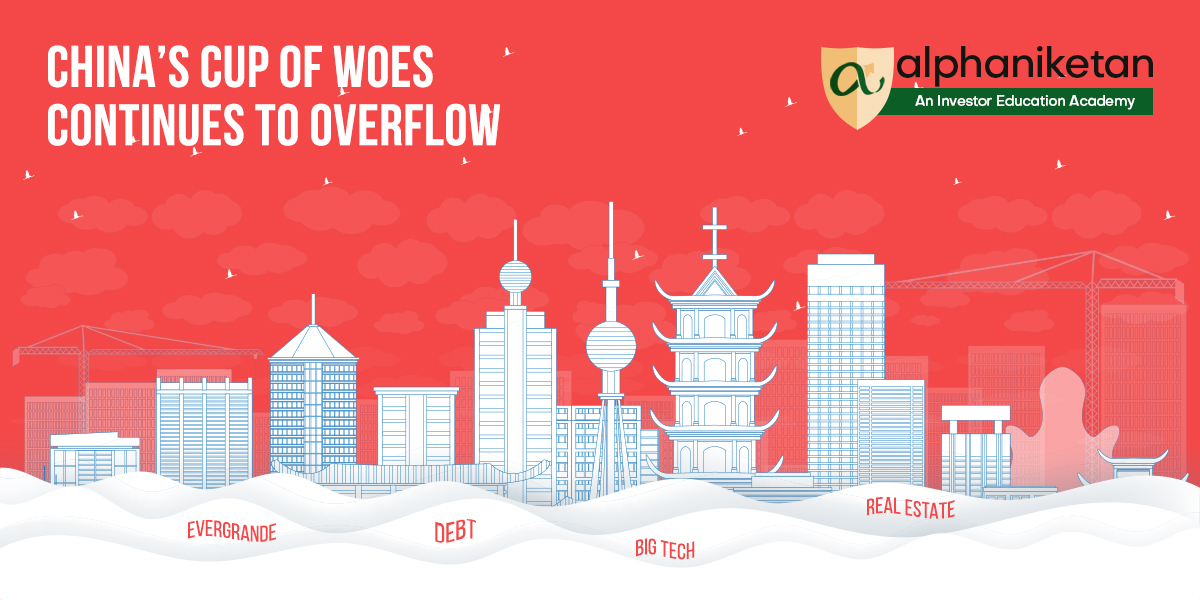 Terms like ‘Tsunamis’, ‘pandemics’ and ‘contagions’ have become a regular feature in Asia over the past few decades. According to estimates thrown around, the Chinese real estate developer ‘Evergrande’ owes $ 300bn to over 240 local and foreign banks and non-banking financial institutions. Ordinary citizens are protesting outside half-constructed premises of homes that they fear they may not get.

Financial markets are on edge. The reaction is seen across markets in Asia, Europe, and the US. The real estate giant could fail on interest payments and eventually default on loans.

All eyes are now on the Chinese government. The Chinese property market accounts for a quarter of the Chinese GDP. There is a general perception in the financial markets that the government could help restructure outstanding loans at Evergrande. It could ease rules and allow Evergrande to survive as it is considered too big to fail by many pundits who write on China.

Last month, Huarong Asset Management, a state-owned bad debt manager, was bailed out by other Chinese state-owned enterprises. It was nearly two-thirds owned by the Chinese Finance ministry before the bail-out. After the company announced financial results, press reports reveal that the company has committed to adhering to the core business and exiting from other non-core business activities.

The trouble with Evergrande is that it is a privately owned group. The obligations of the Evergrande Group are close to 3% of the Chinese GDP, according to Michael Mattis, a professor of finance at Peking University in Beijing and a Chinese observer.

Allowing a collapse could lead to terrible short-term turmoil. It would not stop at the Chinese shores. Financial markets across the world would continue to feel the heat.

Many China observers like Pettis argue that there would be a bail-out. They call it a cocktail of proven tricks.

Pettis articulates the potential bail-out process in an article published on the website of Carnegie Endowment, a US-based think tank. He says that the government may create a hierarchy of creditors. It will protect retail investors at all costs. Then, local suppliers and contractors who now turn lenders for Evergrande due to incomplete projects could get protection. A collapse could set small businesses back by many years. Most local banks would need help, too, as they are a vital source of growth. The other problem is potential lawsuits from overseas creditors. The government would then go after the people responsible for these financial losses.

That is unlikely to put an end to any future turmoil. Evergrande is among the first few conglomerates to witness the frenzy. There could likely be more.

The chronology of events makes the intent of the Chinese government clear. It is no longer tolerating flamboyance in business. It is a part of the new equitable distribution of wealth policy of the Chinese Communist Party. When was the last time you heard from Jack Ma, the tallest Chinese businessman and founder of Alibaba and the Ant Group?

It is a clear strategy of redistribution of wealth that is causing turbulence in Chinese businesses. The Chinese would go after anyone or any business that would flaunt wealth or affluence. The clampdown on non-core companies by the Chinese authorities is clear from the actions of the Chinese government on other companies.

Businesses have fuelled growth on the back of money lent by the Chinese state-owned enterprises. The overall debt in China is way too higher than the debt in any emerging market or middle-income economy. By clamping down on affluent businesses, the Chinese government may correct the ‘irrational exuberance of the past.

The Chinese government would extract commitments on redistribution of wealth from owners of large conglomerates. The Communist Party of China is currently in the ‘Robinhood mode’. It is pushing wealthy businesspeople in China to curb their hunger and urge for profits and wealth.

While inequality is a significant problem in a country of the size of China, a forceful intervention like that could have serious repercussions. China is the factory of the world. It is the second-largest economy, and many nations depend on that country to deliver on driving consumption. Over the past several years, China intentionally digressed from relying only on exports for growth. Domestic consumption over the past decade or so was the key driver.

However, a series of events in 2021 is disturbing. First, it was the Alibaba group. Then, there was the dramatic withdrawal of the IPO of the Ant Group, a financial arm and a giant that owns payment gateways and systems in China. The government then went after tech consumer companies like education. The government designated them as a non-profit out of nowhere. It is like telling Byju’s or MT Educare in India to work on costs and fix the pricing of education given by private tutors.

There is a systemic change the Chinese authorities are inducing.

If the intervention by the Chinese government stalls wealth creation in China, it could hurt economies that depend on Chinese imports. There is practically no incentive for businesses to risk further capital and innovate. That is a clear risk to those trying to make money through Chinese bonds and stocks.

Can India smartly attract foreign manufacturing and technology companies from China by providing an investment destination and climate which is comparable to the developed markets? The opportunity is mind-boggling and has come as a windfall.