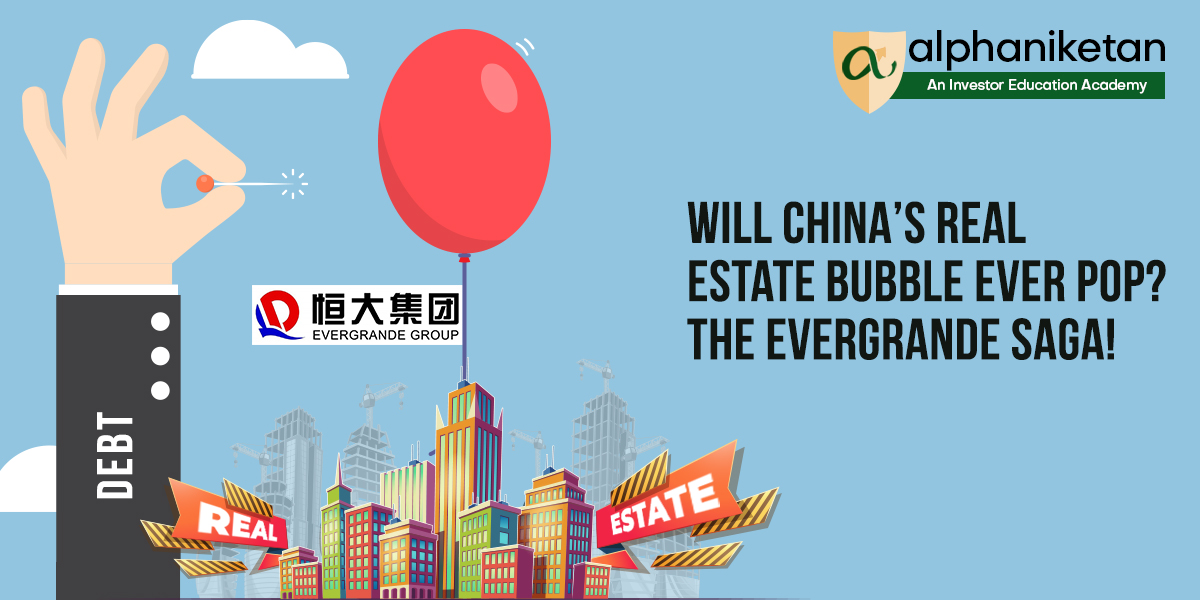 The main protagonist of this story is Evergrande, a systematically important real estate developer of China.

Many of us would not have heard of this company in our part of the world. Evergrande, infamously known as the world’s most indebted real estate developer, was in the news for all the wrong reasons. Just to give a sense of the size of this company; it is the second-largest property developer by sales, based in Southern China’s Guangdong province. The holding company of the group is incorporated in the Cayman Islands. The company owns almost 230 million square meters of land across 235 cities in China! Its balance sheet carries gigantic liabilities of over $300 billion – an underestimation to say the least, because the company has not done any recent revaluations of some of its real estate portfolios. Besides real estate, the company also owns a soccer team, theme parks, EVs, and dairy businesses. But more than 90% of their revenue comes from real estate. In the last few days, the company had lost over three-quarters of its value and its bond was trading at 50 cents on the dollar. As someone rightly said, don’t invest in a company that owns a soccer team! The Evergrande episode is basically China’s structural issue and it’s just the tip of the iceberg.

The history of the real estate boom in China

To understand this, one needs to analyze the anatomy of the Chinese real estate economy. China had witnessed quite a large boom in middle-class income for the better part of the last two decades. The middle class had enough money but sadly, had very few avenues to invest. They were not allowed to invest overseas; the bank’s returns were paltry and the stock market was always a treacherous  rollercoaster ride. The only avenue left for them to invest was in real estate and why not?

The property prices had always gone up by more than the growth in inflation and the Chinese middle class assumed the former will keep going up forever! This had led to the Chinese middle class spend every last penny in a frenzied buying spree of real estate, fueling the building bonanza of an unprecedented scale in human history. No nation has ever built such a large number of apartments in such a short span of time. Some estimates say that the property prices have soared by 35 to 40 times of households’ gross annual income! This boom had made real estate an integral part of the Chinese economy, the main driver of the growth engine, some would even estimate that it accounts for almost 20 to 30 percent of the economy!

Why do we think that China’s real estate bubble will not pop!

Folks in the West compare the Evergrande saga to the Lehman Brothers crises. We feel the comparison is unjustified because of the underlying dynamics at play. In China, approximately, 78% of the country’s wealth is tied up in the real estate. Real estate forms the biggest part of the Chinese household asset portfolio. This is mostly due to the lack of investment avenues available which prevents citizens to build a multi-asset class portfolio. While the whole world is focused on the sharp rise in property prices and the looming debt crisis of Evergrande, they tend to ignore the fact that the land beneath these properties is owned by the Chinese Government. The Chinese Government took control of all lands within China’s borders after the creation of the People’s Republic of China and following the bloody “land reform movement” in 1949. The CCP (Chinese Communist Party) is now the sole landlord in China and they decide how the land should be used. No one in China has rights over the land but they have the right to build on the land.

In this entire game, CCP is the only player that owns the market, controls the supply, and manipulates the prices. Local governments in China heavily rely on land sales to finance their budget and often use the land as collateral to raise debt. Many firms in China widely use real estate as collateral to borrow. The Banks are heavily exposed to real estate. In such a scenario where everyone is linked and affected, it is highly unlikely that the bubble will ever pop! The worst one can expect is that the Chinese Government will implement corrective measures which may not lead to a contagion. In our view, a real estate bubble burst in China would actually be tantamount to sovereign collapse. Should this happen, though improbable, it will be a disaster of epic proportions for the world economy. Let’s not wish for it!

As Thomas Orlik wrote a book on China titled “The bubble that never pops” says “against the odds and against expectations, growth continues, wealth rises, global influence expands. The coming collapse of China is always coming, never arriving”.

We believe in it too…

This article is authored by Nanda S – Co-founder, Alphaniti