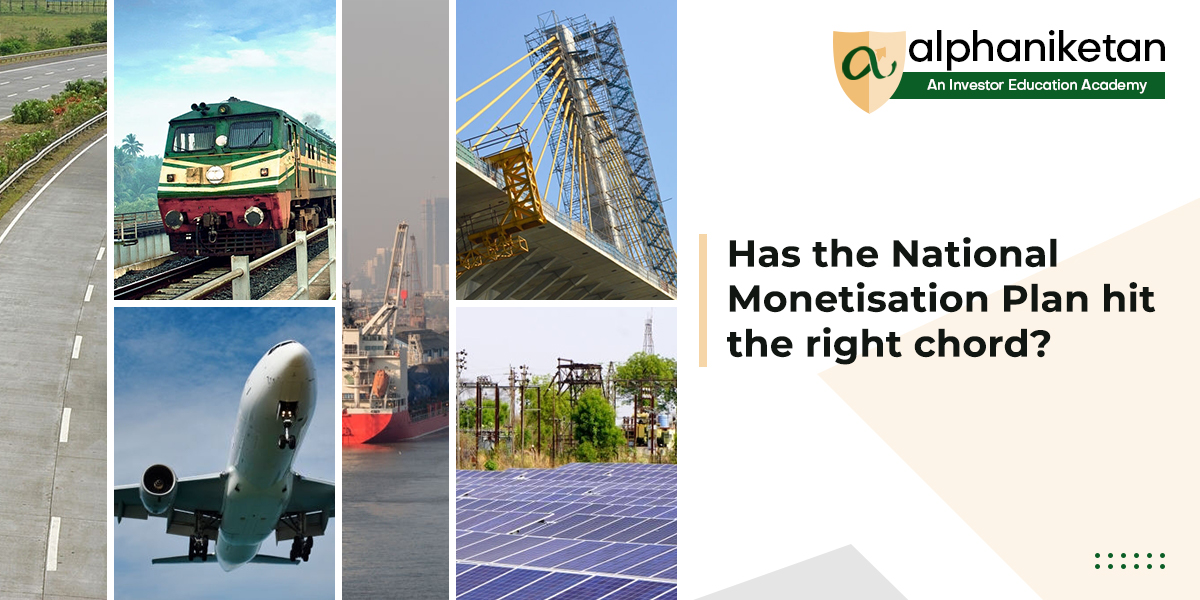 Linked closely to the National Infrastructure Project announced earlier, Government-owned brownfield infrastructure assets in 13 sectors would be monetised. Brownfield projects aim to improve the operations of infrastructure projects that have been built and are leased or offered for purchase.

By leasing existing assets such as roads, ports, transmission lines, stadiums, training centres, a new stream of income would be generated to fund new infrastructure projects.

A structured contractual partnership is being aimed at instead of “privatization or slump sale of assets”, by engaging both foreign and private investment to utilise or redevelop these assets for a certain number of years unlocking tremendous national economic value.

This will include 26,700 Km or 20% of National Highways (NHs) throughout FY 2022 to FY 2025, to be offered on a Toll Operate Transfer model under the aegis of the Infrastructure Investment Trust. Additionally, Rs 1.52 lakh crore is likely to be generated by rail assets including 400 railway stations, 90 passenger trains, 1 route of 1,400 km railway track, 741 km of Konkan Railway, 15 railway stadiums and selected railway colonies, 265 railway owned goods-sheds, and 4 hill railways.

The proceeds will be used to finance the Rs 110 lakh crore national infrastructure pipeline.

All eyes are also set on the asset monetisation dashboard claimed to be set up for monitoring real-time progress of NMP providing a single umbrella approach to investors keen on taking over assets of Government departments and ministries.

“PPP” triggers rather painful memories for the private sector because of its inept execution. However, there is a key difference between the NMP and the previous PPP launched in 2013, where the risk was allocated between the private and public parties while trying to attract private capital into infrastructure. In this model, the risks associated with both developing and operating the assets were borne by the private entities. Acquisition and clearance delays under the PPP model led to cost escalation and revenue projections failing to meet the expectations. This in turn led to un-serviced bank loans and delays due to various litigations, thus adding to the strain on the entire banking and judicial system.

Starting 2022, the assets that have already been created by the Government would be recycled for revenue generation, without diluting the ownership. These models have already been adopted elsewhere for several years and have now been adapted in a creative way to give additional thrust to capex while ensuring better operational efficiencies. For roads, the government plans to use a mix of its toll-operate-transfer or TOT model as well as the investment trusts or InvIT model to monetise which has been employed by the Ministry of Road Transport and Highways (MoRTH) since 2016 for the monetisation of road assets to long-term investors.

The scale of the NMP has been enhanced significantly from the Budget announcement of Rs 3.5 lakh crore. The step is in the right direction as the ownership of assets will remain with the Government, mandating a handover back to the Government after a certain time.  The government would however require upfront money, revenue share and investment commitments from the private investors.

Finance Minister Mrs.Nirmala Sitharaman, has confirmed, “The government is not selling off anything.”

If successfully implemented, the plan has the potential for creating employment opportunities and enabling high economic growth while integrating rural and semi-urban areas for public welfare

It would be very important to optimally structure the private sector investments and strictly adhere to the timelines for clearances and transaction completion while ensuring the active monitoring of real time progress and good governance.

One of the key success factors of the scheme is the appropriate selection of “de-risked brownfield assets” that have “a stable revenue generation profile”. The overall transaction will be structured around revenue rights as the government will continue to retain the primary ownership of such assets.

Fund raising and issue listing could however be affected by market conditions and the recent experience of low toll revenues due to COVID-19 restrictions.

Apart from ownership and clearance issues, the Government also has the mammoth task of attracting private operators to participate in the plan on the back of their response being somewhat lukewarm in entering into recent operating contracts.

A robust dispute redressal system needs to be put in place since there are several entities and the regulators of different sectors, apart from Centre and State Governments involved in the process of monetising these assets across geographies.

The participation and support of State Governments is critical in the NMP Push as the assets are often jointly owned, for example of the warehousing assets of 755 lakh tonne of storage capacity, about 343 lakh tonnes of capacity is held by the State agencies.

The Government would have to consider the interests of the labour force, especially in sectors such as mining and railways on account of the perception that they would be losing job security because of the implementation of NMP. NMP is a great concept and its success would depend on efficient implementation, participation of stakeholders and learnings from the mistakes of the past.