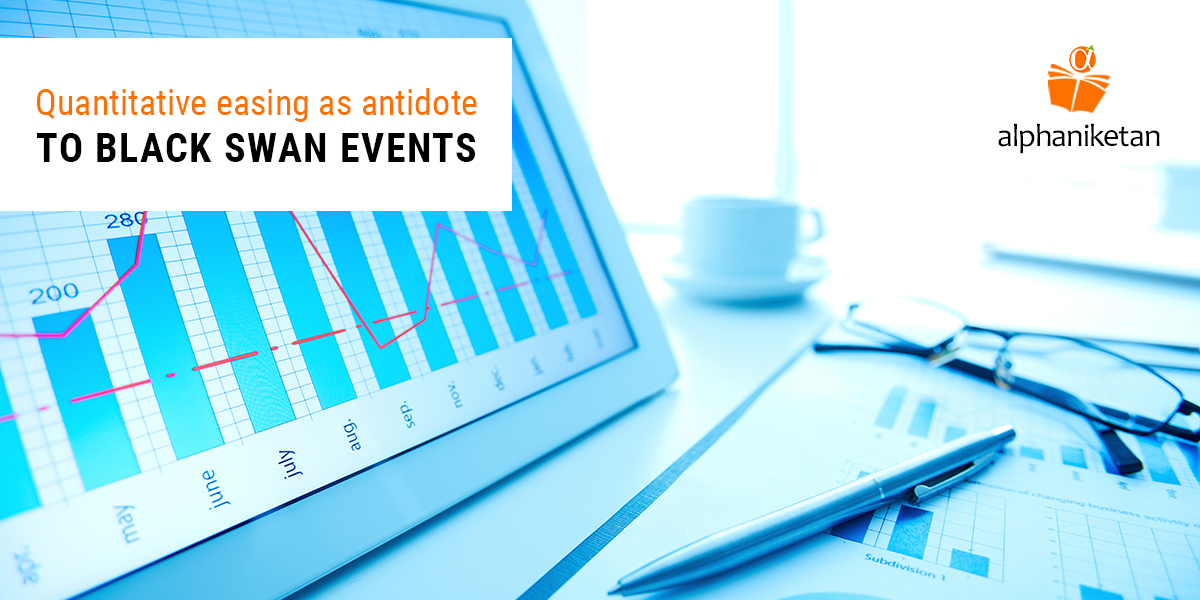 Unforeseen events are a part of our life. But the possibility of things which may appear to be remote or even outlandish may occur anytime. And when such events happen, they change the direction of the way we think or live our lives considerably. A case in the point is the recent widespread of the Coronavirus which has changed the way we work. Such unforeseen and extraordinary events are termed as Black Swan events. Finance professor and trader Nassim Nicholas Taleb made this expression popular through his books which cover this aspect in the most detailed manner. Black swan events have a deep impact on economies. Demand in key sectors of an economy is disrupted. And most experts and analysts find it difficult to forecast the direction of demand. In such delicate situations, central bankers have been unanimously following the strategy of quantitative easing (QE), which began in early 2009. QE has had a deep and lasting impact on asset prices which have a direct beating on the underlying health of the global economic engine. So, what exactly is “quantitative easing” and how does this affect “investors”? Let us understand these nuances:

Quantitative easing simply means infusing liquidity in the economy. Central banks resort to buying long-term bonds from markets. It works in two ways. It provides more cash to investors. Consequently, these investors—banks and institutions—further lend or invest. When sentiment is low, investors and financial institutions tend to shy away from investing or lending. They prefer to park their funds in safe government bonds and bonds with high credit rating. When the central bank aggressively buys such bonds, the prices of the bonds go up and yields go down. Investors prefer to book profit in these bonds but they find it difficult to reinvest in similar bonds as the yields turn unattractive. Low interest rates, thus achieved, also incentivises consumers to borrow and spend, while entrepreneurs may find it attractive to invest in new plants. Such actions revive the economy in the medium-term.

This approach works when interest rates are at historical low levels or even close to zero and there is less scope to cut interest rates further (which has been a traditional tool in the hands of central bankers to try and stimulate the economy). In response to the economic shutdown caused by the pandemic, on March 15, 2020, the US Federal Reserve announced a quantitative easing plan of over $700 billion. This was further enhanced by committing buyback of at least US$ 80 billion in treasuries and US$ 40 billion in mortgage-backed securities, till further notice. European Central Bank announced on March 18, 2020, a bond purchase programme of 750 billion Euros, whereas the Bank of England followed with a bond purchase programme of GBP 200 billion on March 19, 2020, as a part of coordinated efforts from central bankers worldwide to fight the pandemic-induced slow down. As regards India, the Reserve Bank of India opted for a clear strategy of rate cut and open market purchase of bonds and targeted long-term repo operations, or more popularly known as TLTROs. The aim was the same—to being down longer term interest rates and infuse considerable liquidity in markets.

Post these confidence boosting measures, we have seen the “risk on” narrative drive precious metals (gold), equities and even new age asset classes such as Bitcoin moving up after an initial drop in March 2020. All these risky assets as such have responded positively to quantitative easing.

It is important to understand that though central banks pump in billions of dollars to revive the economy, the outcomes may not be necessarily the desired ones. While the green shoots and economic growth take time to appear, a few unwanted outcomes surface. When there is too much money chasing what is necessarily a limited stock of assets, their prices go up as investors outbid each other, especially in their quest to participate in ‘performing’ asset classes. This results in inflation. Consequently, investors holding on to low-yield bonds lose out on returns.

As inflation begins to pick up pace in the real economy as well, existing investors begin to revise their yield expectations upwards. They demand more interest rates and thus the interest rates in the economy begin to inch up. The first phase of quantitative easing started in the US in January 2009 and ended in March 2010. Over this period, interest rates moved up from 2% to 4%.

If the quantum of upward revision in interest rate does not match expectations, then the real interest rates turn negative.

It means the rate of inflation exceeds the rate of interest. This makes investors poorer. Such investors are forced to invest in risky assets such as stocks and precious metals. In this context, already elevated asset prices move up even faster than anticipated, creating a “bubble” like scenario which ultimately results in investors undertaking large doses of risk for diminishing forward returns.

Is your Portfolio Battle Ready?