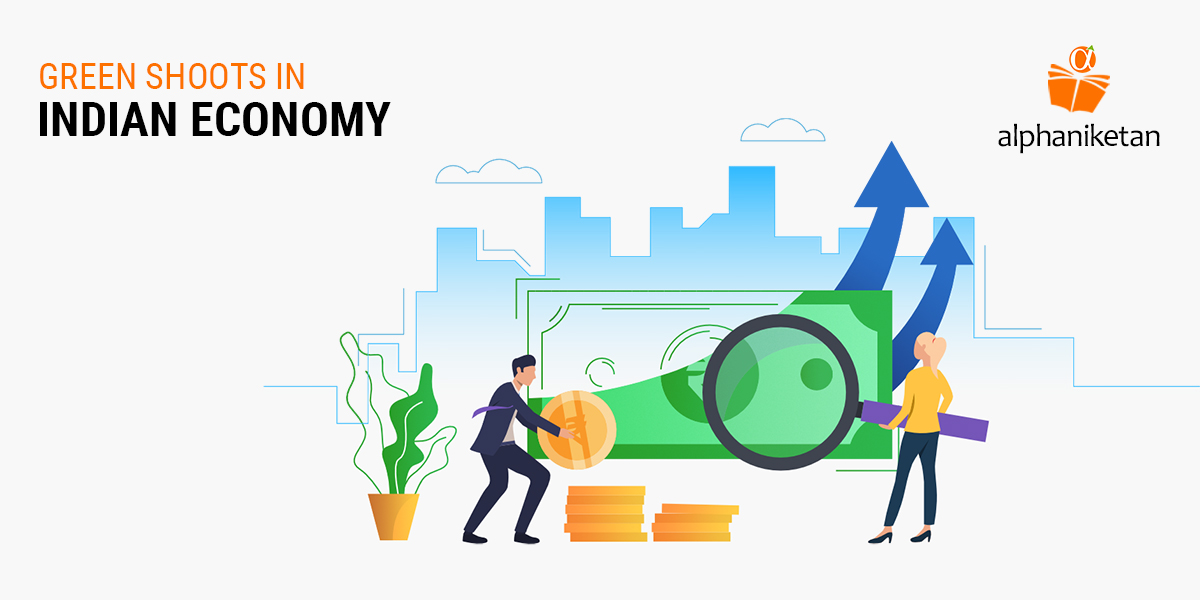 In recent months, the spirit of renewed hope and optimism is reigning high in the Indian economy.

It is not a mere change in mental outlook of investors or the public at large. It has acquired more meaning and significance now. A clear trend is unfolding. A mere visit to your nearby grocery shop or a long evening walk in near your home will provide ample indicators that things are returning to normality with a brisker pace than many had imagined. Consequently, key macro-economic and business variables have shown pronounced improvement. Today, the assumption that the Indian economy is like a sinking boat is mostly likely to be dismissed as a thought of ‘stubbornly pessimistic’ mind. There are definite early indicators of economic recovery. In finance, these early indicators are encapsulated in a term called ‘green shoots.’ Let us understand India’s ‘green shoots’ which will give more validity to the wave of optimism engulfing the Indian economy slowly but steadily.

Now, let us move to things which are beyond essentials. In absence of a robust public transport system and increasing tendency to travel to work have triggered growth in car registrations. Car registrations have improved to 197,555 in September from 27,441 recorded in May 2020. Even cement demand has been improving in recent months with improving construction of infrastructure projects. According to various estimates, in October, all-India average cement price was trading at 7% higher than last year’s October to Rs350 per 50 kg bag. Compared to 4077 thousands of tonnes of cement production, India registered cement production of 24229 thousands of tonnes.

Even the pace of awarding infrastructure projects from the government has been increasing. The National Highway Authority of India (NHAI) did highest awarding in April-August period in the present year in comparison with the past three years in the same period. NHAI awarded 744 km length of roads projects in comparison with three-year average of 516 km in April-August period. Also, steel production rose to 8520 thousand tonnes from a low of 3137 thousand tonnes from the trough of April 2020. These facts clearly indicate that the Indian economy is on the revival track. Even macro-economic variables have shown clear trend of improvement. India’s exports rose to USD 27.58 billion in September 2020 compared to USD 26.38 billion registered in October 2019. India’s imports rose to USD 30.31 billion in September 2020 compared to USD 17.12 billion in April 2020.

Though there are reasons to cheer, one must not slip into the zone of irrational exuberance.

It is important to understand that this growth momentum needs to continue. The demand for goods and services in some sectors may have reached the pre-covid levels. But a question that requires thorough examination is: Does the improvement in key economic variables indicate pent-up or secular demand or both? One needs to take into account the fact that the infrastructure output went down marginally. It fell marginally by 0.8% in September 2020. The destruction of demand in the past two quarters will not be made good in mere one quarter. Sustained increase in economic activity is important. The market foresees that this growth in economic activity will continue. This indicated from the revision of the street’s earnings’ estimates for FY22. In comparison with FY21—the present fiscal—the street foresees the next fiscal-FY22—to be better year in terms of earnings’ growth.

The corporate earnings for Q2 topline companies have significantly exceeded expectations leading to multiple earnings upgrade which makes Indian companies look very attractive for both Foreign and Domestic Investors. But investors must exercise restraint, be cautious in their optimism and form a concrete view only after this pace of growth continues in the aforementioned key macro-economic and business indicators.

Inflation today is high, but tomorrow matters much more

Is the technology sector ripe for value play?