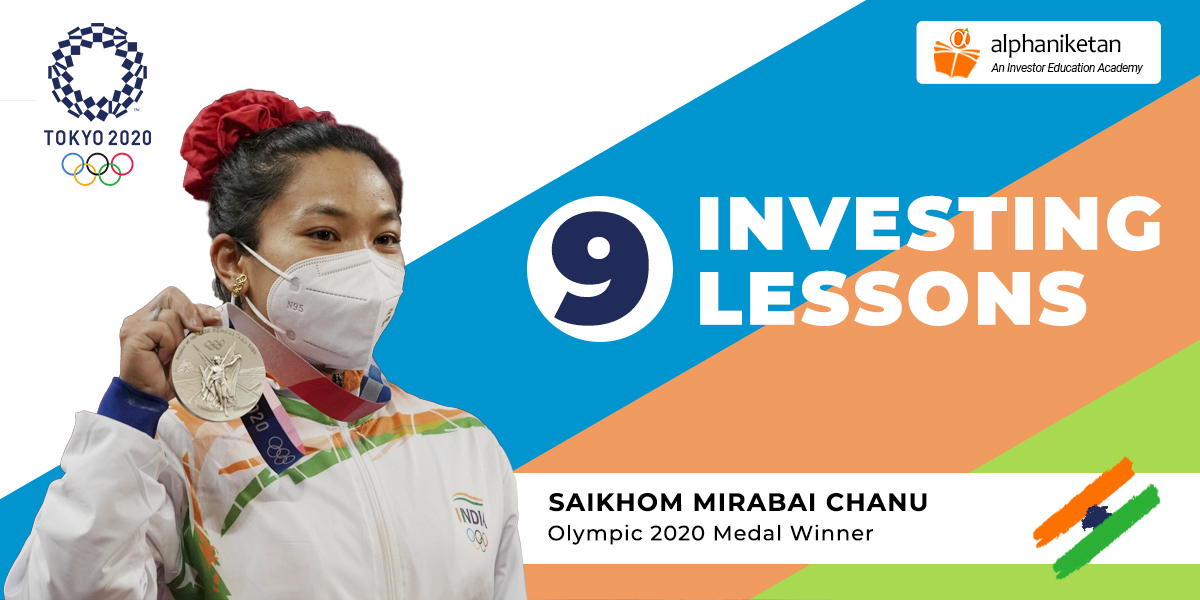 Kickstarting the medal tally of India on the Tokyo Olympic 2021 scorecard, Saikhom Mirabai Chanu, has returned home this week. While the victory has propelled the hopes of the country, the first win of the largest-ever Indian Olympic contingent offers amazing investment lessons.

Here are nine investment lessons we can learn from the life and glittery performance of the star sporting Olympic symbol earrings.

The young wonder of Mirabai Chanu, weighing 49 kg, proves that not just big companies but emerging stocks too can create wonders. But you need to spot the potential early, like petite Chanu’s mother identified her talent at the age of 8 years when she could lift heavy timber back home in the modest Nongpok Kakching village. Her elder brothers too failed to lift the amount of wood Chanu could.

Once you have identified a promising stock, stay invested for the long haul. The tremendous might of weightlifting performance has been fetched by holding the barbell for seconds, but the muscles were built over 13 years of rigorous training since she first signed up for the sport in 2008 at the Khuman Lampak Stadium in Imphal.

Often investors opt for the sectors that are doing well in the current period. However, multi-baggers can emerge from the sectors and even geographies that currently do not look promising but hold immense potential for future rewards. So, while the Indian medal hopes were high for an archery medal, an unexpected win landed in weightlifting by the 26-year-old Chanu.

Do not be afraid if the company you have selected alters its business model. Chanu who was about to sign up for archery as her parents were into archery and football. She accidentally moved to weightlifting after she felt an adrenaline rush when she witnessed a weightlifting training in progress.

Don’t give up on downward trajectory

Not all losers can be given up on. Imagine selling a stock that failed to deliver in 2016, but that proved to be a wealth maker all through after that. Such is the success of Chanu, who literally tightened her belt and has made world records and snatched gold medals in both the World Championship 2017, Commonwealth Games in Australia 2018 and a bronze in the Asian Championship 2021. The winning streak came after the Rio Olympics 2016 failure, where she failed to register even a single lift in three clean and jerk attempts.

At Tokyo Olympics, Mirabai lifted 87 kg in ‘Snatch’ round, successfully lifted 115 in ‘Clean and Jerk’. But couldn’t complete the 117 lift in her final attempt. At Asian Championship, Tashkent, win in April 2021, she could succeed only in one attempt.

Two days after the weightlifting event, the gold medallist China’s Zhihui Hou is set to undergo a doping test at the Tokyo Olympics. As a result of this, the position of one Olympic winner can be altered due to developments on the competitor’s front. The same way a company’s stock price too can be impacted by the developments in the peer group of sector or even geography. Several external factors are at stake.

Aim for companies with mentors

There is no denying that the efforts of her coach Vijay Sharma and later in 2020, the rehabilitation programme with strength and conditioning coach Dr Aaron Horschig have immensely impacted the performance of Chanu.

Under your investment portfolio, opt for companies that have marquee advisors, who have mastered the area of business development. The way they steer the boat at the helm would alter with expert advice leading to solutions for problem areas. Horschig located the issue of strength in the shoulder and improved her form and technique. Ultimately, these small corrections helped Chanu become of the second Indian woman weightlifter to win an Olympic Medal.

But one must not forget to celebrate the victory like the Olympic 2021 star who sported Punjabi Bhangra after the win. Every goal that you achieve through your investing habits needs a pat on your back for diligently following through the charted plan. Learn from the mistakes and move ahead to aim for the new life goals through a better investment strategy. Adopt Chanu’s strategy used to overcome the Rio Olympics 2016 failure, “It is ultimately about your power to believe. You focus on training, you recalibrate goals and slowly those memories recede,” she said as she prepared for the World Championship in 2017.

So next time you are watching Olympics remember these investing lessons and apply them to your favorite stars – it will bring a whole new perspective and excitement, too.

One year of Pandemic and the Stock Market