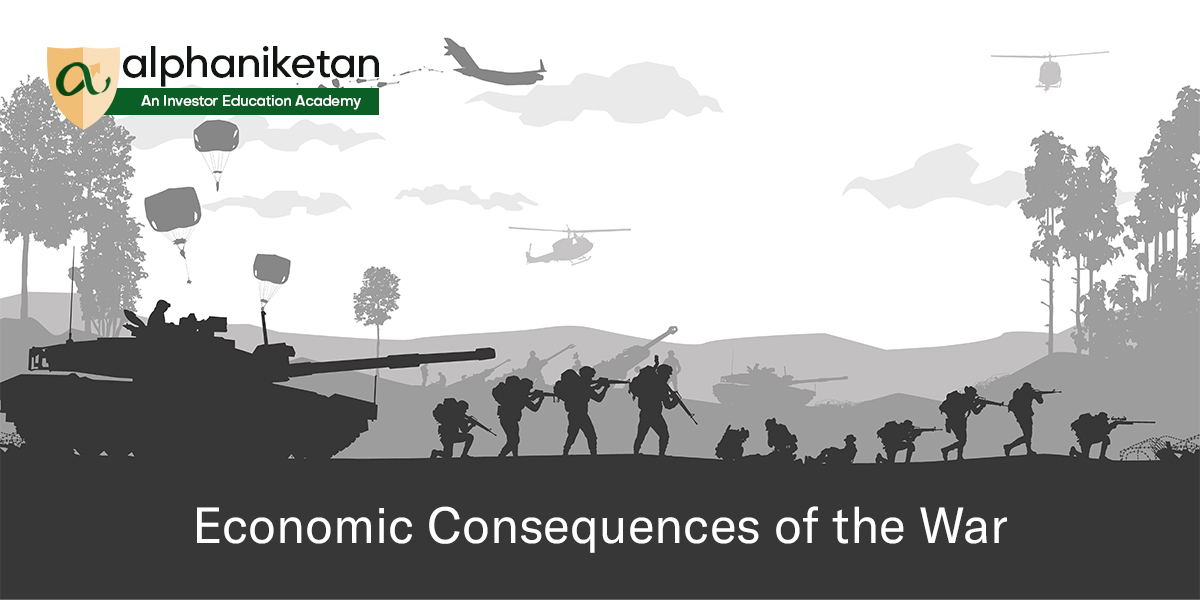 Benjamin Franklin, one of the founding fathers of the United States of America, once said that there was never a good war or a bad peace. It has been more than a month since Russia invaded Ukraine. All one can do is sit and watch the tragedy unfolding. The ensuing economic consequences of such a war, however, stay for a long time, even after peace finally returns.

An interconnected world cannot stay immune to the consequences that leave behind death and destruction. Those who survive, face hardships directly or indirectly, as inflation spirals and economic growth starts to slow. Rising fuel prices could trigger high deficits in net oil importing countries like India. The surging costs of food items like corn and wheat could lead to civil unrest in poorer countries in Africa. A surge in natural gas prices and metals could slow growth and induce stagflation in rich countries.

Russia and Ukraine are significant suppliers of fertilizers to the world. The war and sanctions have already resulted in global fertilizer prices surging more than 30% in this calendar year itself, touching record highs. That is terrible news for the agriculture sector across the globe.

The International Monetary Fund warns that the long-term economic consequences of the war in Ukraine could be significant: “The war may fundamentally alter the global economic and geopolitical order should energy trade shift, supply chains reconfigure, payment networks fragment, and countries rethink reserve currency holdings”.

The impact on Indian Stock Markets?

There has been a surge in volatility in the global equity markets since the beginning of this year. Stock markets in India, Asia and the US gained ground over the past month, while European markets witnessed a negative trend. However, investors are quickly allocating money to relatively safer markets.

What we need to realize is that the impact of the war on India is both internal and external. However, an over 8% economic growth and relatively steady corporate earnings outlook over the next couple of years are currently keeping market participants optimistic even in the face of significant uncertainties unleashed by the current war like situation in Europe.

Foreign portfolio investors have been net sellers in India in 2022. Since October 2021, FIIs have pulled over Rs 1 trillion from the Indian equity and debt markets, which is at the fastest pace seen since the GFC in 2008. Yet, markets have remained pretty resilient even in the face of such aggressive sell off by FIIs, largely thanks to the strong support by domestic investors who continue allocate steadily to Indian stocks and bonds. India would have witnessed a sharp drop in share prices if it had not been for domestic institutional buying.

A large outflow puts pressure on the Rupee value too. Stubbornly high oil prices mean India’s imports stay elevated in US dollar terms, and the trade deficit widens. Despite exports touching a new high, India has a wider current account deficit and faces pressure on the Rupee. That makes imports even more expensive.

High-frequency indicators tracked by the Reserve Bank of India and published in an article earlier do not show any significant recovery. However, there is no indication of any pronounced downside either.

India’s consumer price inflation is hovering around 6%, and 10-year bond yields are just under 7%. While that does not indicate panic but borrowers will have to settle for rates at current levels. They are unlikely to fall any further as the pressure on the Reserve Bank of India to hike borrowing rates intensifies due to inflation. India Ratings, an affiliate of global rating agency FITCH, highlights that the total refinancing requirement is around Rs 5 trillion for 2022-23 for 1,423 non-financial, debt-heavy corporates. The agency expects refinancing risks to ebb, primarily driven by healthy earnings in the past two years and a significant deleveraging by a few large debt-heavy entities.

So is it as good as it appears from the resilience shown by our stock and bond markets so far?

There are several factors which have led to India showing some semblance of stability in an increasingly unstable world. A few examples of these:

CRISIL, a prominent credit rating agency, expects the government’s production linked incentive across 15 manufacturing sectors could lead to a capital expenditure of up to Rs 3 trillion over the next three to four years. With corporate balance sheets showing strength, that should trigger a cycle of economic investment activity and ultimately boost consumption in the long run.

Another bright spot is with respect to the surge in Agri inflation globally. India stands to benefit significantly from this: If wheat & Sugar prices remain high in international markets, India could export more of the same, which will ultimately benefit the end farmers. India is producing record foodgrains & Sugar each year. Higher prices to farmers from export markets could potentially unleash revival in rural incomes that will spur consumption. The crisis may turn into an opportunity then.

How war in Ukraine is reverberating across world’s regions

Why you should tread cautiously as share prices rally