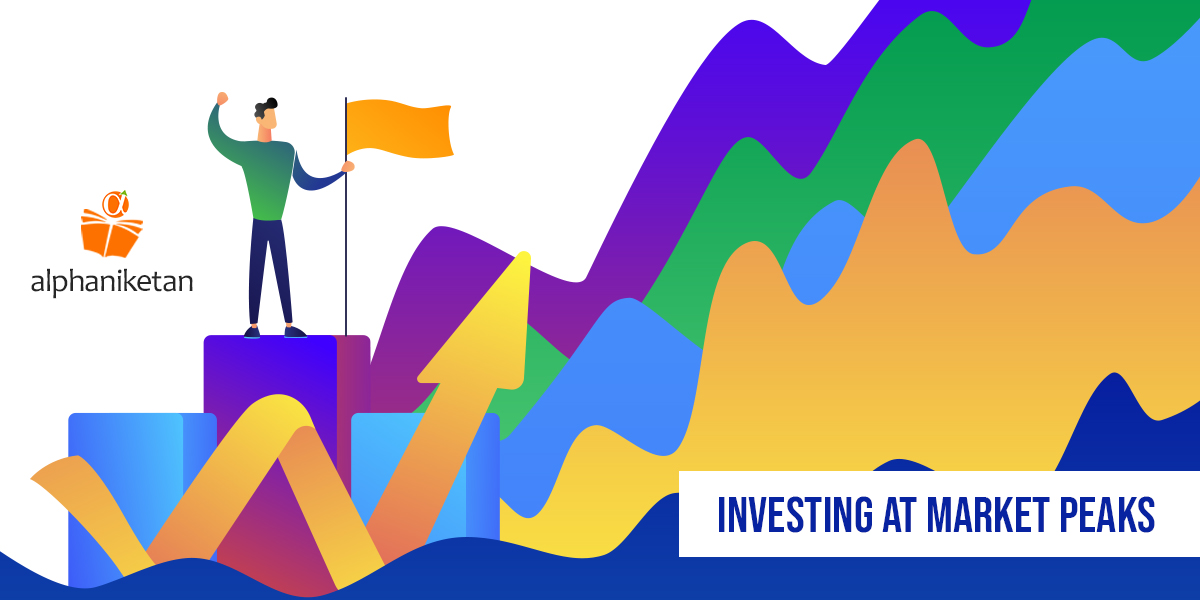 Ever since the stock market hit its recent low in March 2020 correcting some 40% in response to the Covid-19 related lockdown and the ongoing sharp rebound thereafter, market experts have been largely caught on the wrong foot, intermittently predicting boom times ahead and a sharp correction.

The market is now up about 80% from the March lows and some 40 to 50% above the Nifty targets given by most of the leading brokerages in April 2020.

As is their wont, the leading brokerages have revisited their targets after the market started hitting new highs almost on a daily basis and are now projecting the markets to go even higher. No doubt, these gyrations in the market and the incessant cacophony of expert comments confuse investors no end.

To a new investor looking at a long term chart of the market – Sensex over the last 40 years and the Nifty over the last 25 years – the graph represents a gradual upward sloping line with several kinks on the way up. These kinks are mostly smallish wrinkles but in some cases like in 1995, 2000, 2008 and now in 2020, the wrinkles are a bit more pronounced. While this is generally true of broad markets, specific companies and sectors have a different story to tell. Several of the leading companies and sectors that were a part of the early Sensex are no longer in it. Many of these companies have gone down under or have been taken over/merged and several sectors have become irrelevant from the standpoint of the economy.

As far as the broad market is concerned, investors are generally concerned about the slope of the upward moving long-term graph, whereas traders lay emphasis on the short-term kinks in the graph.

Since 1994 till date, Nifty 50 Index has closed at all time highs ~5% of the time. The average forward returns have been as follows:

This is the fundamental distinction between these two types of participants in the market and reflects their differing time frames, as also their proclivities in interpreting new information.

No one, including the best technical and fundamental analyst in the market knows what the future holds.

Technical analysts largely base their predictions on chart patterns, whereas fundamental analysts predict equity prices based on their estimate of fair value, That said, markets have a mind of their own and are not obliged to follow the chart patterns drawn by technical analysts or stick to the fair value estimated by fundamental analysts. Markets routinely over/under shoot the price targets of the best analysts and when this happens, most analysts come out with new price targets based on a revised reading of the state of play in the market. Though markets are not bound by any price targets, it is however useful to know how the market played out at a similar juncture in the past and given the level of interest rates, liquidity and investor sentiment, the range of fair values for the market or stocks.

If truth be told, unlike what most of us possibly intuitively believe, it is not entirely a losing proposition to invest during market peaks. Statistics reveal that over the last 100 years in the US market, on around 5% of the trading days, markets closed at all-time highs. A recent JP Morgan analysis of the market over the last nearly thirty years further reveals that the average returns of investing at random since 1988 is worse than the returns generated when investing only at all-time highs over most time periods.

Of course, one of the all-time highs will enjoy this honour for quite some time and this could sometimes extend to even 7 years but such long periods are not typical, though the highest is 25 years after the great depression in 1929. One of the redeeming factors about long-term investment however is that most of the widely followed indices are price indices without factoring dividends and dividends do make a large difference in the long run.

The widespread spirit of entrepreneurship, increasing household savings and the efficiency gains for the economy on account of rural to urban migration, in addition to the Government’s effort at modernising India’ broken infrastructure, are the essential building blocks for India’s thriving economy. With less than half the economic activity in the country being represented in the listed equity markets and given the immense potential for economic growth in the country, the broad equity market performance can be reasonably expected to be robust.

How can the typical investor who is otherwise busy with his business, trade or profession capture the immense potential for sustained super-normal returns that the equity market offers?

For investors who are not full time into following the market, the distinction between the gradual upward sloping graph of the broad equity indices and the volatile graphs of quite a few of the companies and sectors is extremely important and offers the best rationale for reasonable diversification of their portfolios. Creating and regularly investing in adequately diversified high-quality portfolios is the best way for such investors to capture the superior long term returns offered by equities. This requires a good understanding of the macro-economy, the direction of interest rates and liquidity, the dynamics of the market, performance of the various sectors of the economy and businesses, as also the strategy and management capability of specific companies. Unless one develops the required skills to analyse these and other factors, it is best to seek appropriate advice from competent professionals to create and monitor portfolios of the various asset classes to achieve ones investment objectives. While so doing, we need to appreciate the fact that most of the time, broad based indices continue to rise, though sometimes indices do fall and test our patience as investors. This is what makes investing interesting and makes the case for holding a well-researched diversified portfolio of stocks and other asset classes in the long run.

The Writer is Mr. UR Bhat, Director at Alphaniti

UR Bhat is one of India’s highly acclaimed investment managers having managed foreign institutional investments in the Indian market. In his previous roles, he has been the CIO at Jardine Fleming (JPMorgan) and ran Dalton Capital’s India investment advisory arm. He has done his M.Sc. from Indian Institute of Technology, Kanpur, and is a Fellow of the Chartered Institute of Bankers, London

Is the technology sector ripe for value play?