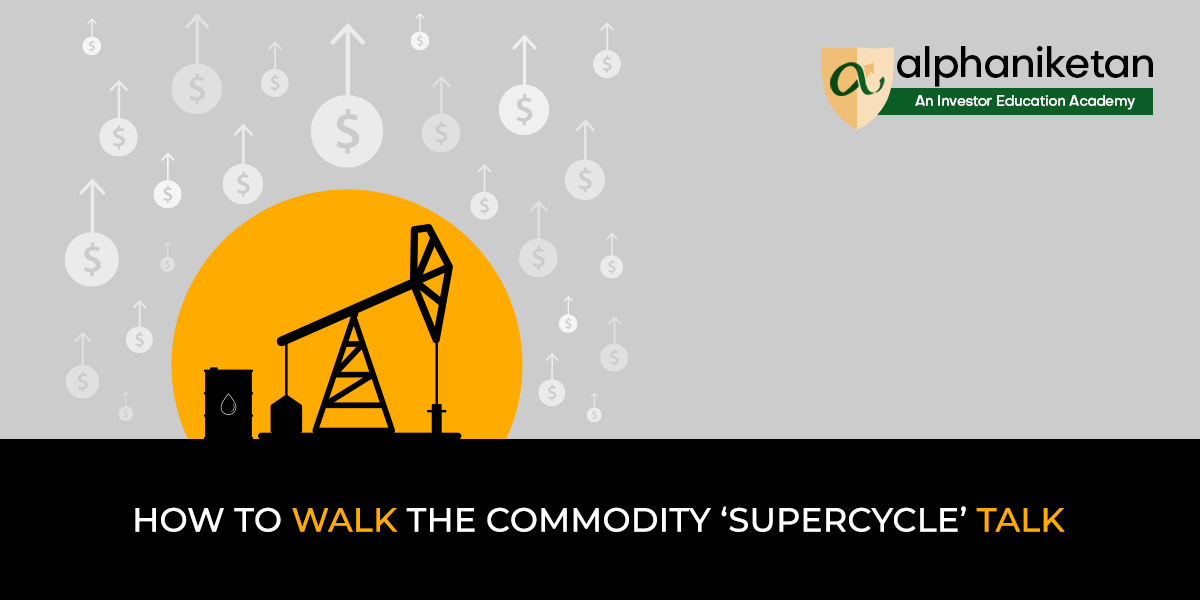 There emanates from superlatives a destructive force. Elias Canetti, a Nobel laureate for literature, probably said that in the context of the second world war. In financial markets, a lot of people are quick to describe situations with an exaggerated effect. After months of gains, a sharp correction in share prices could be called a ‘plunge’ or even a ‘crash’. Rapid increases after a fall could be termed as a ‘V-shaped’ recovery.

If there is a phrase of the year for 2021 for financial markets, it would be ‘commodities super cycle’.

There is a significant surge in the prices of metals, fossil fuels and other items. Over the past 12 months, coal prices have more than doubled. Gas prices jumped 75%, while metals have gained 43% in value. The first half of the year debated whether global markets are entering a commodity ‘super cycle’. Despite prices of crucial metals cooling off lately, conversations around a supercycle continue unabated. There is hope that the surge in demand after a global pandemic would continue unabated. In short, we are in a commodity supercycle.

What is a supercycle?

A supercycle means a long period of an upswing in the prices of essential commodities. The gains are driven by demand from rapid urbanisation and industrialisation in a big country. Alan Heap, a commodity strategist at Citigroup, in a widely cited note in March 2005, called the boom in commodities in the 2000s a supercycle that was led by the surge in demand from China. According to him, the upswing portions of these cycles lasts between ten and thirty-five years. Before that, such a supercycle was witnessed when America had an economic expansion in the 1800s. The second was from 1945 to 1957, when Europe and Japan were rebuilt after the second world war.

Such demand in a supercycle is driven by urbanisation and industrialisation. According to an article in the latest Monetary Policy Report of the Reserve Bank of India, the supercycle attributed to China continues even today. It argues that prices of commodities in this super cycle peaked around 2014-16. The upturn in the costs over the past year is attributed to the shorter cycle components. That means the rally in the commodity space is due to supply-side factors such as escalating transport and logistics frictions and costs. The recent correction in the prices of crucial metals dampens the spirit of supercycle enthusiasts. But debates and discussions continue as certain metals appear to be in a secular upside.

The Chinese government is taking dramatic steps to curb commodities and energy price inflation. According to media reports, there is rationing of power supply that could affect the production of aluminium, iron, and steel. In the short term, there is a shortage of most of these metals.

In a cyclical pattern, businesses into commodities ramp up manufacturing capacities when demand surges. Many steel and other traditional metal manufacturers are pushing up production in various parts of the world. There is a likelihood of supply adequately meeting the demand over the next four to five years. It is unclear if the need for iron, steel, aluminium and zinc would sustain for long. There are some serious doubts about the supercycle in these items.

However, metals in the energy transition phase like Lithium, copper, cobalt and nickel could just witness a super cycle. Such commodities are likely to remain in a structural upswing. ‘Net zero by 2050’ is a significant world ambition where governments are pledging to zero carbon emission by 2050.

Lithium is used in battery-powered devices. The other three are needed too. A demand-price elasticity study of these metals in the latest IMF Global Economic Outlook shows that a 10% jump in the price of Lithium increases the output by 16.9%. After 20 years, the same price jump would raise the Lithium output by 25.5%. That percentage is much lower for copper, nickel and cobalt. A primary reason for the Lithium output to grow faster than others is that it takes seven years for new production facilities as it is extracted from mineral springs and brine. The other three commodities need mines that take as long as 19 years to construct.

The crystal ball gazing that the IMF report does finds that if Net-Zero by 2050 emissions targets is met, the demand boom for metal production would be six-fold. The production would be worth nearly $13 trillion over the next two decades for the four metals in the discussion. It would be as much as the oil production then as everyone would use less fossil fuel and more zero-emission energy resources.

The supercycle does exist. However, it could be in selective metals and not across the board, unlike the previous cycles. You need to dive deeper and find out those commodities that would feed into the future needs of the people for the supercycle to last.

Alter your portfolio in sync with the emerging workplace trends