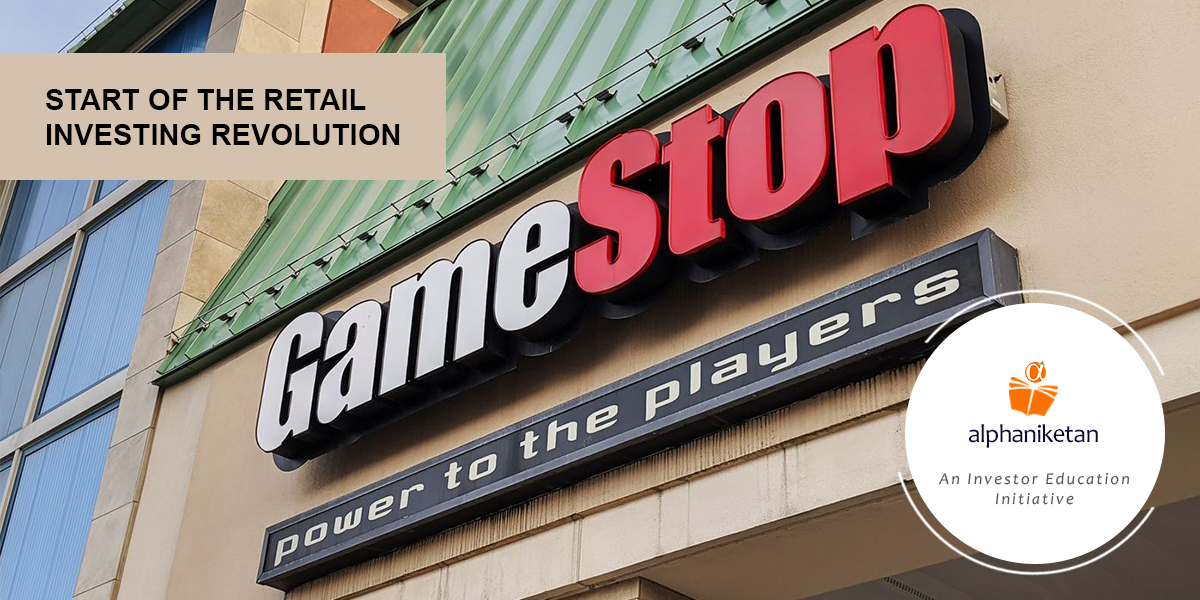 Over the course of the last one week, GameStop – a US based omni-channel retail company that offers gaming and entertainment products across 5000 stores over 10 countries became the cynosure of Investor attention and wild frenzy as a previously unthinkable saga started unfolding at break neck speed.

Rewind to early 2000, GameStop was a successful software retail company selling video games, consoles and accessories. The brick-and-mortar model of retail gaming centres flourished over the next decade and half till digital games which could be easily downloaded on Mobile and other Web devices started to become popular. With consumer preference shifting to online purchase of games from cloud as well as to the latest digital version of PlayStation, Xbox, Nintendo which streams online content – clearly GameStop had to swiftly change to a digital cloud-based model and pivot their business from offline to online.

Going into 2020 and with outbreak of the Pandemic, GameStop had to close down large number of their stores and resort to significant restructuring of costs in a bid to survive. Through the Pandemic as lockdowns started to being imposed, the popularity of digital games from the confines of people’s homes skyrocketed. Many of GameStop’s Investors who had earlier invested heavily into the company as the erstwhile leader in Retail Gaming, turned sellers and many Hedge Funds joined the bandwagon to make a killing by shorting its shares and driving its price to all-time lows. Despite this, it was not entirely doomsday for GameStop and the company even got in one Marquee Investor with a successful background in e-commerce who was ready to bet on the company going fully digital and also double up as a re-seller of gaming consoles of Sony and Microsoft.

In the opaque, fiercely protected and incestuous world of high finance, hedge funds and the ultra-rich, information has been the opium on which many of these businesses have thrived and amassed their fortunes. Access to early information, high frequency trading, front running etc. provided disproportionate and unfair advantage over a highly fragmented and diverse base of Retail Investors.

With massive growth in digitization, advent and adoption of technology a lot of such information are today available on various social media platforms where large Retail Investor communities are actively participating to exchange ideas, opinions and information.

In January 2021, one such community Reddit which has a sub-group called ‘wallstreetbets’ got the information that Short sellers had over- sold almost to the extent of 140 pc. Activist boarders on the platform were also screaming “Deep Value” motivated by entry of the Prominent Investor in GameStop and a possible turnaround. Some Institutional Long Only Investors maintained their Investment holdings in GameStop which further convinced the retail investors of the inherent under-valuation of its stock price.  Combination of these led to retail investors uniting and manic buying of GameStop shares which drove the price up from around 20 USD to a dizzying intra-day high of 483 USD in a matter of few days. The buying momentum led to a massive Short Squeeze forcing Hedge Funds who had been short sellers to buy at a much steeper price leading to losses running into billions of dollars and eventual bailouts. This chronology of events has shaken up the Institutions and their style of functioning and many are now crying foul as their unfair advantage over the small investor has apparently come under serious threat.

As digitization becomes permanent, high finance get decentralized, information dissemination happens at lightning speed and investing knowledge gets democratized, the US market regulator may choose to tighten the systemic loopholes to make the market more efficient for all categories of participants and not curb the rights, energy and free market spirits of the Retail Investors. The action of the small Investors coming together in the case of GameStop and few others, as such a formidable force may well be the start of the Revolution of Retail Investors, to occupy a portion in Wall Street.

Arindam has been involved in key leadership positions across the financial services industry in India and Asia Pacific region across Asset Management, Wealth Management and Fintech.

Cryptos/ NFTs – What lies ahead?